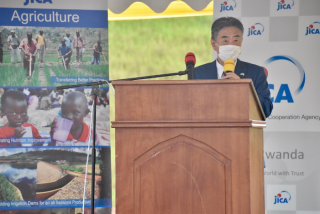 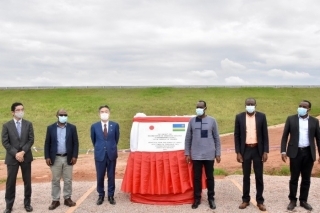 Mr. Jean-Claude MUSABYIMANA, Permanent Secretary of the Ministry of Agriculture and Animal Resources, said that in 589,000 hectares of marshlands in Rwanda, 48 percent of them are now irrigated, and thanked Japanese Government for its key contribution. He said that the Ministry of Agriculture and its partners pledge the sustainability of the project, also noting that the farmers have to use the available opportunities to increase productivity. “The land in our country does not increase, but there is a way to increase it, which is the increase of inputs and better management of the land, which both lead to larger productivity.”

Ambassador IMAI said, “The Project aims at enhancing productivity in agriculture by rehabilitating three irrigation dams, and through capacity building of farmers in irrigation and water management. It is our honor that Japanese technology and experience can contribute to the development of Rwamagana District. As of today, I hope Agriculture Sector in Rwamagana District will become more productive and resilient, such that the income of local farmers will increase.”

According to the Representative of Rice Farmers’ Union in Rwamagana District, there was a cooperative that used to irrigate one season of the year due to shortage of water, but the problem has been solved. “As the dams got older, the quantity of water kept diminishing and the irrigated land got shorter and shorter. Now, the water reaches everywhere, we the farmers are very happy,”